The Flexers are intelligent and flexible Mixels, and live in the western Sproingy Lands/Rubber Lands. They are orange with black highlights in color.

On the surface, they appear to be wild and dangerous, but in reality, the super stretchy Flexors are an intellectual bunch.

Even though there were rumors that they despised Krader, this is shown to be false.

Tentro was seen exersizing with Teslo. That could mean that they have a good relationship. The rest is neutral.

Gobba and Kraw are best friends.

The following list is of episodes in which all three members of this tribe are seen. 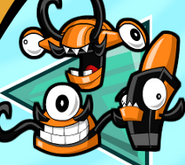 Add a photo to this gallery
Retrieved from "https://mixelsshorts.fandom.com/wiki/Flexers?oldid=6919"
Community content is available under CC-BY-SA unless otherwise noted.